Story behind "The Journey is the destination" sticker

Posted on Nov 18, 2014
If you have recently placed an order with Baum-kuchen, you have received this "the journey is the destination" sticker in the package! The making of this sticker started from the conversation Frido and I had about wanting to share our gratitude during the holiday seasons to our customers. Just like anything we do, process is an inspiration of why we do it so I thought I would share how it was designed and made!

First Frido started with creating some samples for initial ideas. I liked the ones with airplanes out of all the things he did but none of them quite felt right. 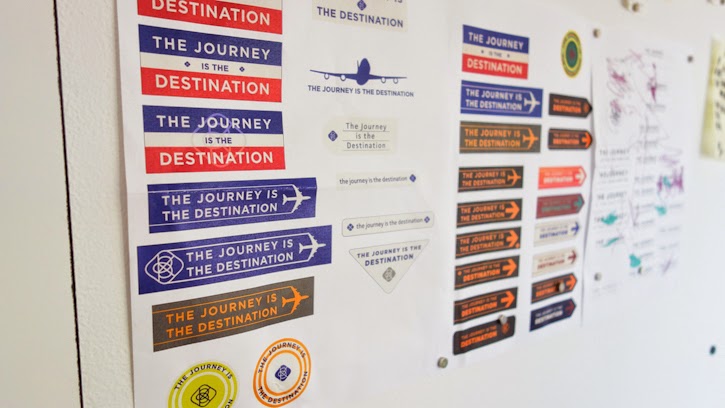 Then he tinkled with compass design and the "north star". We wanted to keep the design simple without making it too boring. A hard place to balance, right? I doodled some ideas and obviously... Satchi and Coco chimed in during our brainstorm session. 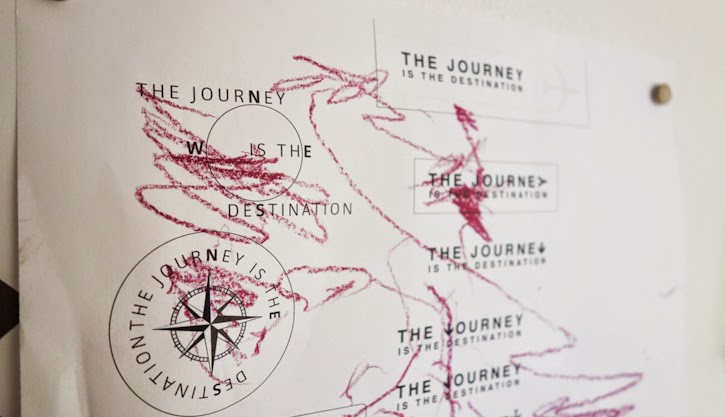 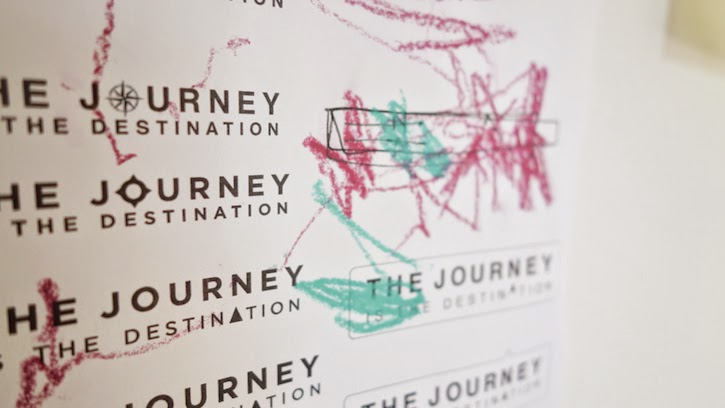 Then we stumbled on this design where "The Journey" is much bigger than the rest of the types which captured the essence of the quote and an arrow that was created by "A"  as a part of the word "destination". The letter "A" is slightly offset and tilted few degrees... pointing the "N" above. We thought it was clever, subtle and unexpected... but something about digital types and how they were so perfect didn't feek right to us. Then we had an idea of creating a stencil out of the digital file and physically re-creating the design on a piece of canvas with spray paint.

I know... it was totally backward in process but we wanted to make sure that stickers we were designing are one of the kind even though they were digitally printed. So Frido went off to make it happen. (I know... he is amazing...) 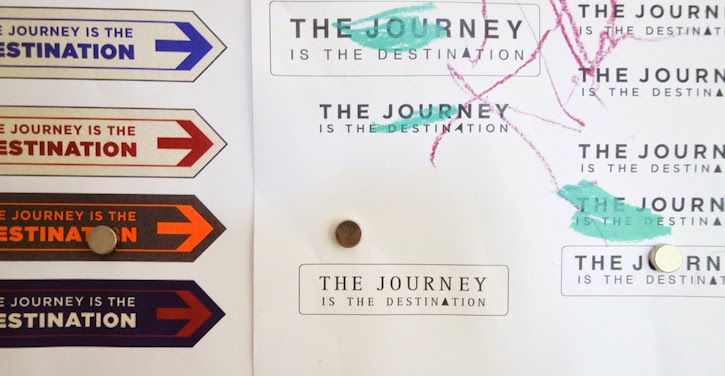 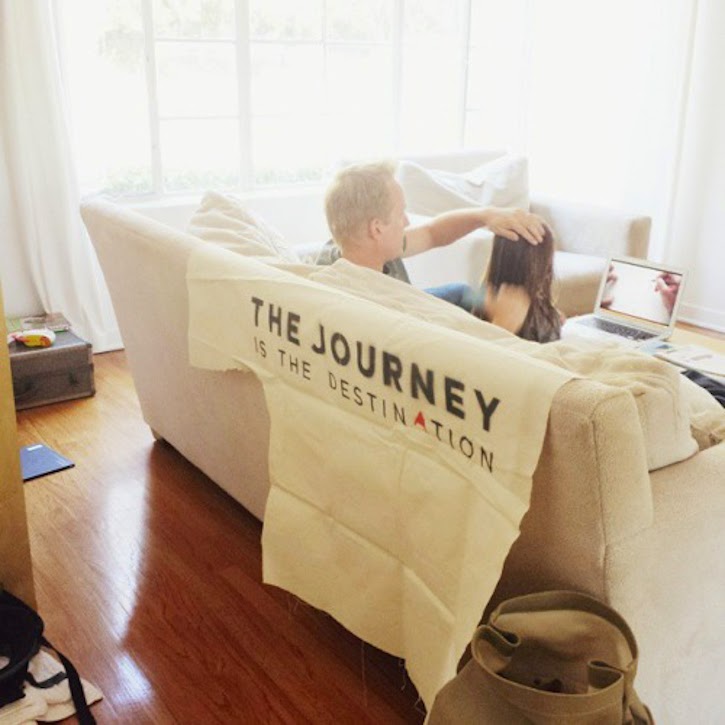 We were so excited when he came home with the design being painted on the canvas!!! From wrinkles that came from the way it was folded previously to smears that happened naturally from the process of stenciling... they were all the trace of an analogue process. I wished we could have kept it as a couch cover because it looked awesome draping on the couch.

But I brought it to the studio next morning to do my part: a photo shoot. I hang the canvas on the white wall where it had a natural light in our studio space. Did a few shots and brought it back in the digital world to tweak the photo with Lightroom... Then sent the file to Stickermule to turn the design into actual stickers. 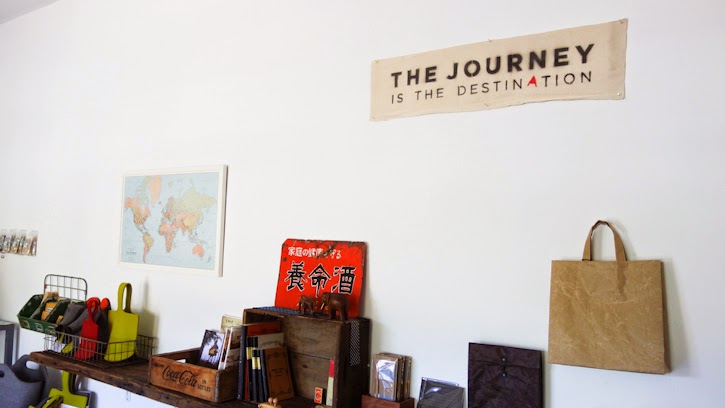 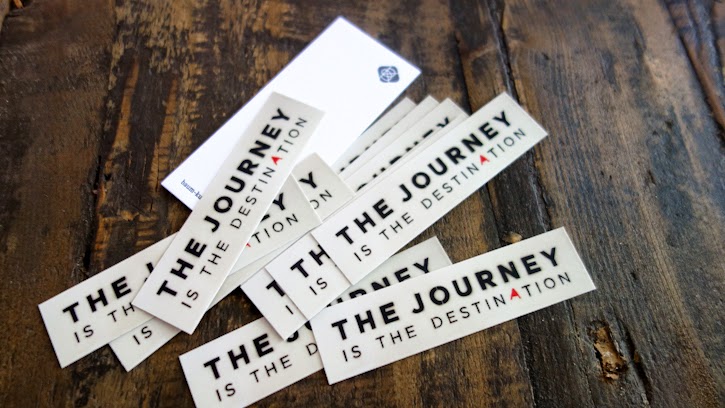 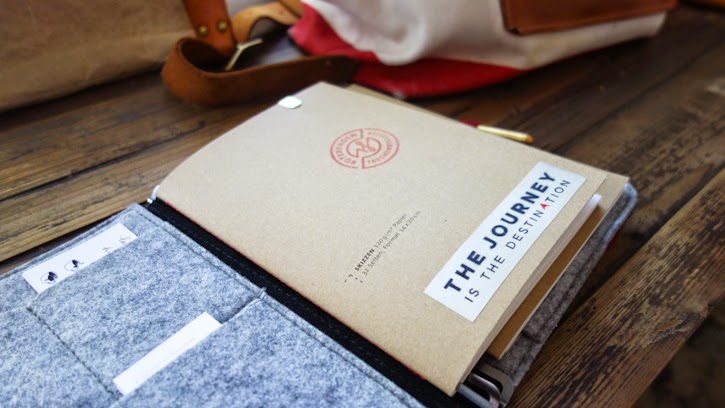 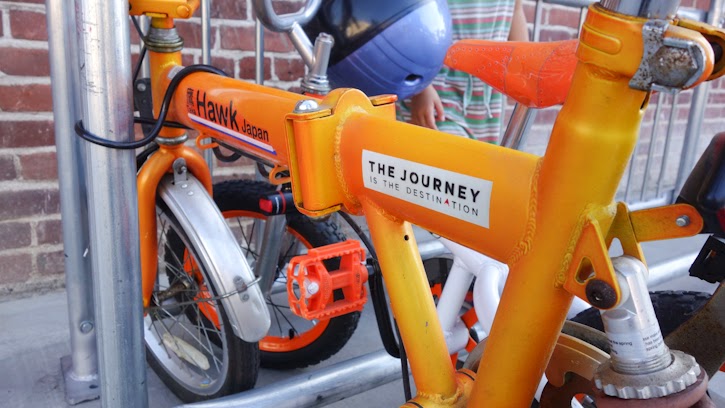 We ordered enough so hopefully we can continue to include them in each package we send out during November and December... and they look great on the notebook cover as well as your bicycles. (They are durable and waterproof!)
I hope you enjoy!
xoxo
-wakako
Facebook Twitter Pinterest