Posted on Nov 01, 2017
In 2014, my sons and I started a Traveling Traveler’s Notebook with simple grid-ruled traveler’s notebook refill. We decided we would send our notebook to various “hosts” in different places throughout the world. Each host would complete a two-page spread, telling us about his or her part of the world, adding photos or whatever they thought would tell an interesting story about their town, state, or country. One host, a woman from Los Angeles, but originally from Malaysia added Malaysian recipes and ingredients for foods native to her country of origin, along with teas to drink. The recipes were neatly enclosed in a small envelope adhered to the page, and as I unwound the string from the eyelet closure, I felt like I was both unwrapping a gift and revealing a hidden treasure. 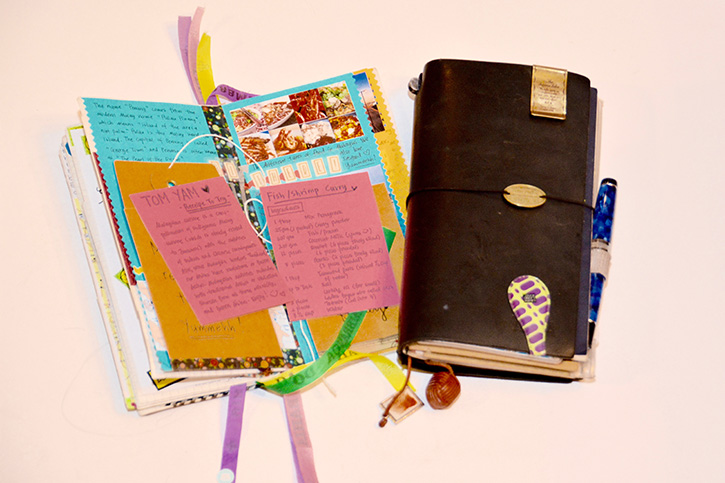 As I read all that Soraya wrote about the food and recipes, I realized that the gift was not just recipes themselves, but the stories that came along with them. I don’t think I’d really thought much about the rich tradition of recipes until that moment, as it was then that I realized that food is intertwined with the story. Cultures and family are rich in food traditions. The types of food we eat, the ways in which it is prepared, the ingredients and spices that we use, the ways and times that we gather for meals, are very much a part of who we are as individuals, families, cultures, and countries. The phrase, “You are what you eat” can be applied to more than the effect that food has on our bodies and our “thighs,” but what it can do to our figurative hearts, and how it shapes our identities. In that way, recipes can convey stories, build bridges, and spread cultures in a powerful and enduring way.

Cookbooks and allrecipes.com are great ways to access recipes, but that handwritten recipe found a way into my heart in a way that a digital recipe never will. Something handwritten connects us to the writer in a way that a cookbook cannot. Finding a recipe, in the recipe box or tucked in a book, written by a grandmother or great-grandmother does something different to our hearts compared to a recipe obtained from a Google search. Handwritten recipes connect us in a deeply human way. Our handwriting is personal. No two hands are alike. Like fingerprints, they are also, very much a part of our identity.

More recently, I received a notecard from another friend, Kate, and when I opened it, I discovered a handwritten recipe card. There was a second slip of paper in the notecard that described the amazingly moving story behind the recipe. Since receiving the recipe, I’ve read that story several times. I find it so intriguing, and it makes the cake even more special. I remember the story each time we make her recipe.