Posted on Dec 03, 2017
Fourteen years ago, I purchased this kit called a Circle Journey Correspondence Kit from a bookstore. It contained a blank book, ten envelopes, stickers, photo corners, and a few other sweet, analog items to be used for a shared letter/writing scrapbook project. The idea behind it was to send the small book back and forth between friends to remain connected. In it, you would share stories, ideas, photos, and other little treasures. According to the idea starter sheet that came with it, “It’s a perfect complement to phone calls, e-mails, and family get-togethers.

I wrote a note on this one and sent it to my one of my oldest and dearest friends. I can see from the date that I was in the final days of my first pregnancy. By the time she received the book and my note and returned it to me for me to write again, I was a new, first-time mother at 35. My next letter would be all about baby, and my next, and it turned out that she, five years my senior, had always hoped to have children, and this seemed to highlight the fact that she might never, and all of this went into the book, which eventually stopped going back and forth, and has sat on a shelf in my closet for about fourteen years. The baby will be fifteen years old in three months.

These letters, like my notebook, are historical artifacts. Pauses in the continuum of time. I hadn’t opened the box since I closed it, and when I did, it all still sat there. Some of the photos had come loose. I thought about re-adhering them and fixing the book up and sending it back to her, as a gift with the hopes of starting our correspondence once again, perhaps more bravely this time. But perhaps that time has passed. I don’t know. The jury is still out on that one.

I hadn’t thought about the Circle Journey book for years, even though the boys and I started sending a Traveling Traveler’s Notebook in 2014 around the world to different hosts, mostly strangers. Each host uses two pages to tell us about themselves and their part of the world. It’s more educational than personal. There are no painful stories of unrealized hopes and dreams. These stories are more about a place than self. But when I found the Circle Journey kit, something nudged me to breathe new life into the idea.

Years ago I’d picked up a Midori Kangaroo spiral notebook and it’s been mostly unused. I tried to take it on vacations with me to fill it with tickets and memorabilia, but it never took. I never stuck with it. I have decided it would be perfect for a “circle journey” inspired correspondence. The pockets could hold our letters back and forth to one another and whatever else we choose to include. Unlike the original Circle Journey book, we would not have to write on the actual pages of the book, but rather we could use stationery or postcards and stick them in the pockets. For this lover of paper and fountain pens, this is appealing. Would I send it to my dear friend to begin again or someone else? Could a correspondence be a Christmas gift? I think yes.

About three years ago, my Midori Travelers Notebook, as it was then called, led me to a Facebook group called “MTN Fountain Pens and Ink,” which I joined. I discovered that there was a member who would set people up with a pen pal. This was around the time that I’d found myself suddenly and newly separated and thought that maybe, just maybe, it would fill the void. She connected me with several people, and I soon discovered that being suddenly and newly separated is probably the worst time to attempt to cultivate new pen pal relationships. Thinking back now, I couldn’t have had anything friendly or uplifting to say. I imagine my letters were quite sad, though I cannot remember what I wrote about, for some reason one pen pal kept me as a pen pal.

I remember my first letter from Rachel and recently found it in my archive storage binder. It was written on ledger paper and folded in a way that made opening it a tactile experience. It was like origami. Opening it was like opening a gift. There a little corner on which the word “Pull” was written, and it unfolded and blossomed into a full letter. One side was written in a green ink, Lamy Safari “Apple Green” to be exact and the other side was written in “Coral.” And the letter was beautiful. In fact, it was so beautiful that I adhered a Midori kraft envelope in my notebook and carried it around for months. I would take it out when my heart was heavy, and I would just look at it. I always say I’m not sentimental, but that can’t be the truth.

Over the years, Rachel, an artist, has adorned my notebook with a number of special works of art, and though I have never met her, her creativity is like magic to my heart. It is a balm for the soul. It’s amazing how her little works of notebook art can captivate me more than any work in any museum ever has. 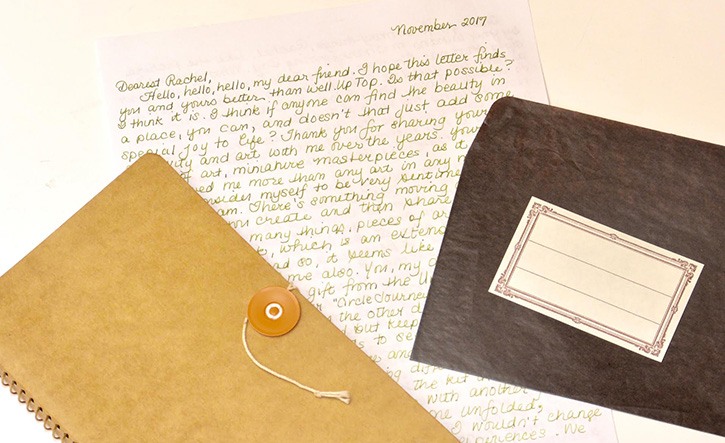 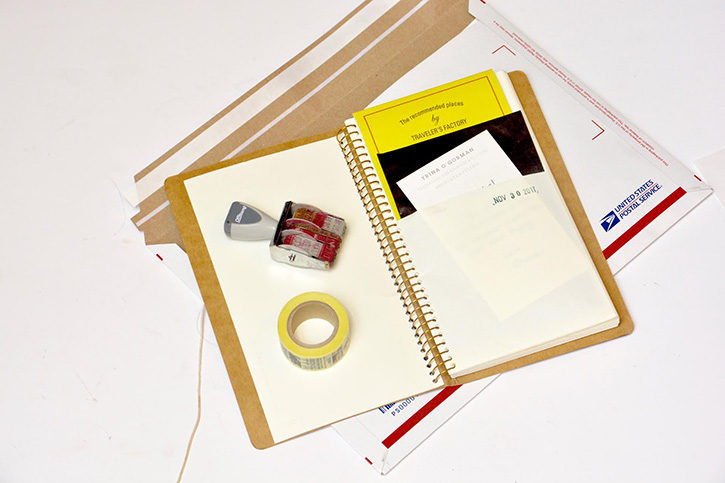 So, this year, for Christmas, she’ll get our first circle journey letter, and together we will create this thing, this correspondence project, which excites me more than just about any gift I’ve ever given. And I’m thinking about creating a second one, for my oldest and dearest friend. Perhaps, we can, fourteen years later, begin a new letter writing journey.